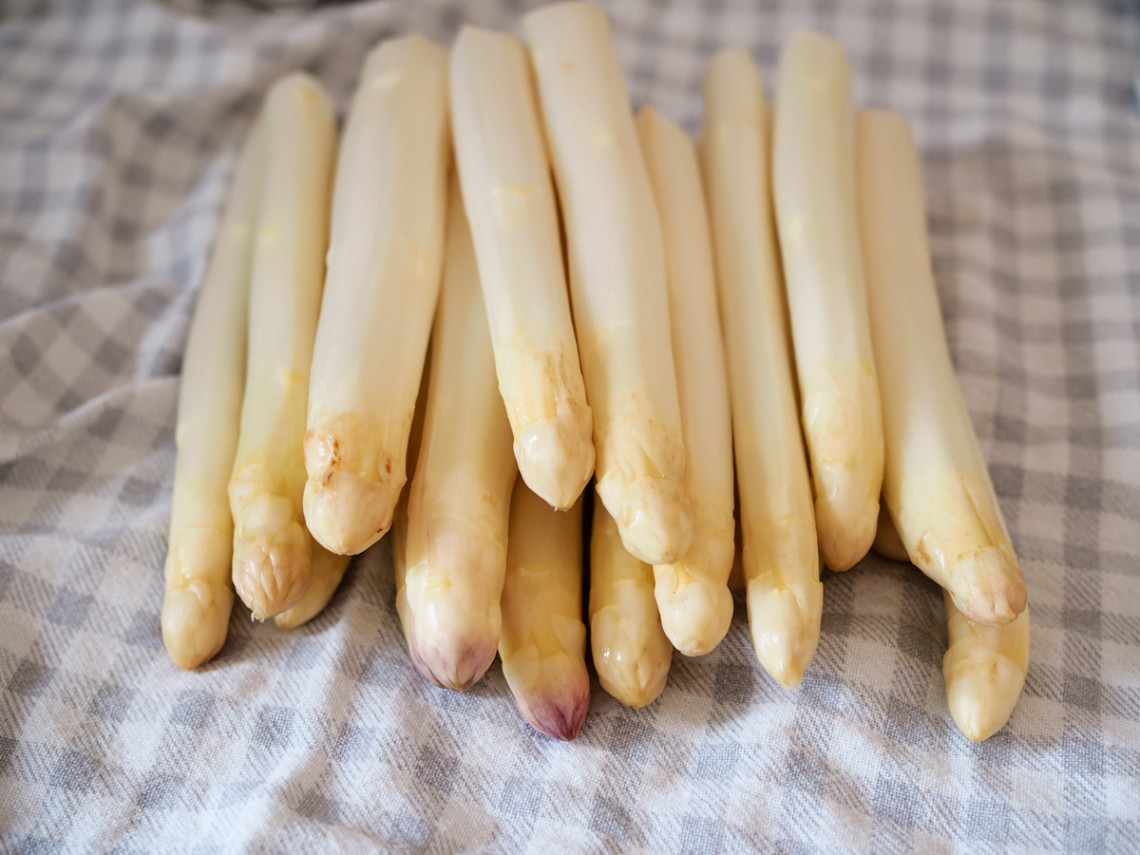 Buying strawberries in winter? That will cause a few raised eyebrows in Germany. Why? Because seasonal eating is a way of life here. Many Germans refuse to buy strawberries in winter as they are shipped from far-away places and therefore taste quite pitiful. In fact, you can’t even get them in most grocery stores in the colder months. Germans rather wait for the sweet and juicy berries you can buy from local food stalls that pop up everywhere from May onwards. But do you know what Germans are even crazier about? Asparagus! Not the thin green one, it’s the white asparagus that Germans consider to be the royal vegetable (“königliches Gemüse”).

Spargelzeit: What’s all the fuss about?

In Germany white asparagus is in season for only a short time: from April to St. John’s Day (“Johannistag”) on 24 June. “Cherries red, asparagus dead” is a folk saying for when you should stop harvesting or buying local white asparagus.

Hard work is required to grow and harvest asparagus as it needs to be picked by hand. That’s why every year in April seasonal workers from Eastern Europe will travel to Germany to help harvest and sort the “white gold”. Because of its temporary and labour-intensive nature, white asparagus is considered luxury food, which is also reflected in its price. 15 to 20 Euros per kilogramme is a standard price early on in the season but it gets a bit cheaper towards the end.

There’s a deep pride in growing this regional produce and some cities even have “Spargel Festivals” to celebrate their local vegetable, for example in Beelitz near Berlin or Schwetzingen near Heidelberg. Some Spargel regions also have their very own “Spargel Queen”, who promotes white asparagus at festivals and events on behalf of the regional growers’ association.

How to prepare and eat white asparagus

Asparagus is said to be a very healthy vegetable as it has lots of vitamins, folic acid and mainly consists of water. However, served the classic way with ham, potatoes and hollandaise sauce or melted butter, it’s not so low-calorie anymore! Asparagus soups and salads are also popular, as well as eating it as a side dish with Schnitzel for example.

The royal vegetable is best served on the day bought but if it has to be stored, wrap it in a damp towel and put it in the fridge for no longer than three days. To cook white asparagus, you peel it from just underneath the flower heads and chop off the woody ends. Some farms and market stalls offer to peel asparagus with a special peeling machine at a small extra cost.

Once you’ve peeled your asparagus, you can put it in boiling water, along with a bit of butter, sugar and salt. There are even special asparagus pots, that allow you to cook it in an upright position, but a wide, shallow pan is fine too. Cook gently for 10 to 15 minutes until the thick ends of the spears are soft enough to pierce easily with a fork.

Where to get white asparagus

You can get white asparagus from most grocery stores from about April onwards but the true Spargel lovers get it from the market or, even better, directly from the farm as that’s the freshest option. To make sure you have fresh Spargel, check the ‘heads’ as they should be closed, the skin should be glossy and the whole vegetable should be firm and moist. For some people, buying fresh asparagus from a farm nearby becomes their weekend highlight during the Spargelzeit, which conveniently coincides with the “Erdbeerzeit” – strawberry season!

From May onwards, punnets of bright red strawberries will light up market stalls across the country. However, peak time is in June, when local farms open their fields for strawberry picking. You can bring your own bowl and pick as many strawberries as you like or buy a basket of already picked berries directly from the farm. The abundance of strawberries will often result in jars of sweet jam that will last until the next season. Strawberry cakes are also a popular option. Homemade, served with a cup of coffee and a generous blob of whipped cream will certainly make you many friends in Germany.

Have you ever tried white asparagus? What’s your favourite recipe? Let me know in the comments!